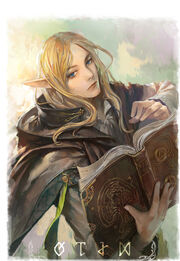 A master mage of the Elves who was member of The Expedition. More about how he joined them can be found in Orchidna's journal entry.

Aranzeb was god-father of Aranzebia and unrequited in love with Kyprosa Daeior. Aranzeb was the keeper of magic and later the King of the Elves. He was a friend of Gene Evernight but when the latter turned into the God of Destruction, Kyrios, Aranzeb tried to kill Gene but lost and perished. This triggered the centuries of Elven hate against the humans and how their once scholarly and philosophic culture turned into one of warriors whose sole purpose was revenge upon the humans for Aranzeb's death.

Aranzeb Is the founding father of the Sorcery Skillset.