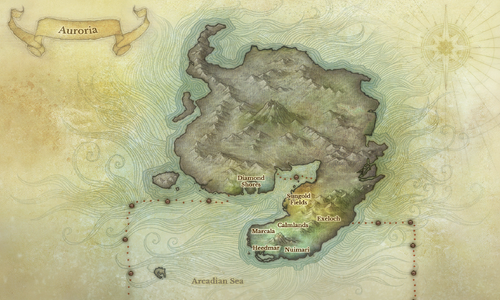 Auroria is the original homeland of the Humans, Elves and Dwarves but was lost in the events set in motion by The Expedition. After the continent had been evacuated rumors that it is once again inhabitable have only recently started a rush for ownership of the land, relics and resources.

The zones of the northern continent, Auroria, are open for habitation and contain areas with level 50-55 elites as well as places for housing and farms. Some parts of Auroria can be claimed by guilds to set up Castles as well as territories for players to contribute to. Player Nations can also be formed in Auroria.
Currently, not all of Auroria is available, easily viewable by looking at the Grey portion of the map. Currently accessible regions are displayed below.