North American(NA) and European(EU) players are given separate sets of servers to choose from. See Servers page for more detailed information about the servers. 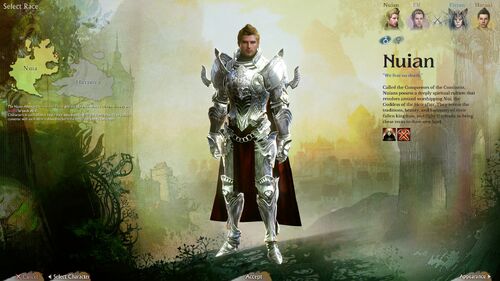 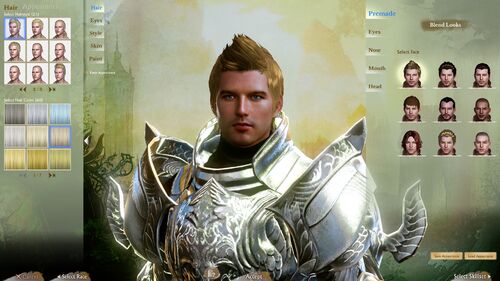 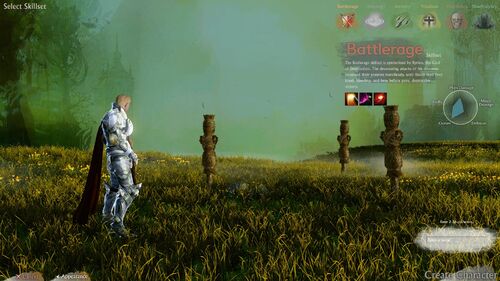 Players are allowed a maximum of four characters per server (initially two, with an additional two purchasable slots), and six characters total across all servers.

Players are able to choose between two factions and six races:

Initial appearance customization involves choosing between one of nine preset faces. Players may "blend" two of these faces into a new one. All subsequent changes to character appearance will only affect the preset chosen. If another is chosen after making detailed changes, those changes are lost.

The player's chosen skillset will determine the initial playstyle of the character. Two additional skillsets can be chosen after the character meets certain level requirements. The initial skillset and any subsequent skillset selections can be changed later in-game.

Skillsets available during character creation only include six of the ten:

Skillsets determine the skills that are available to you. Skill points determine the actual skills that you have. Most skills cost 1 skill point, but many active skills have level restrictions and passive skills have restrictions based on the total number of skill points you've spent within a skill set. Some active skills may gain in Rank as you level up, making them more powerful, some never leave Rank 1. You get a couple of skill points to start with and then gain one every 5 levels. Think carefully about how you spend them - although you can, for a fee, drop a skill set and reclaim the skill points you put into it by talking with any Priestess of Nui or Skill Manager. You are then able to select a different skillset).

Names in ArcheAge must be unique and must not contain spaces. Basic naming standards (no vulgarity, copyrighted material) apply.

Names can be changed with the Name Change service (purchased with credits) every thirty days. However, names already taken will not be available.