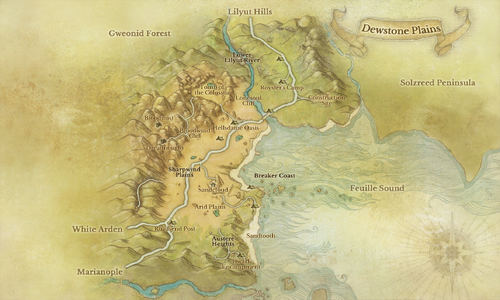 Dewstone Plains is a mostly arid region bordered by hills and rocky canyons to the west and by the ocean on the east. It is home to the first dungeon instance in the Nuian starting zone: Sharpwind Mines. It is accessible from the Lilyut Hills in the North, or from White Arden or Marianople in the South. Nuian armor crafting quests start here as well.

To the east of Royster's Camp, there is a Daru offering a chance to play a mini-game, where you can win plenty of prizes, in exchange for a simple gold piece.

The Construction Site is a well-known mining area that offers a lot of iron in a small area. It's one of the best places for mine-farming in the game.

To the far, far east - beyond the Construction Site, beyond the bug-infested forest, as far east as you can go - there is a small path (though blocked by some rocks) that leads to Lacton in the Solzreed Peninsula.

If you feel like exploring, it's said that the view from the watchtower in Roadsend Post is a sight to behold.