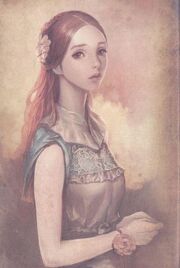 Eanna, a human, daughter of the former Governor of Delphinad and member of The Expedition. Orchidna's journal describes how she joined that endeavor. Eanna accepted a soul fragment from Thiol and the duty to carry the soul of Nuil (note: NuiL, not Nui!) henceforth and bring her out of the underworld and back into the world.

Eanna became Nui, Goddess of the Hereafter. As such she sacrificed herself to open the first Hereafter gate, allowing survivors to escape the violent and final battle between Gene Evernight (now Kyrios, God of Destruction) with Aranzeb and the other gods and leave the now crumbling continent of Auroria.

Nuia was named for Nui herself, as a gesture of respect from all those she had saved.

The skillset of Occultism is attributed to Nui.