Go back to Races. 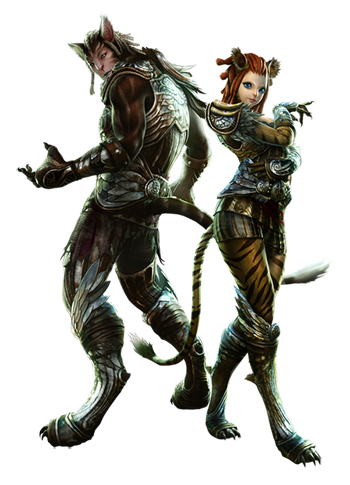 The restless, nomadic Firran roam the wilds, fueled by dreams of reclaiming their former glory. They believe every life – no matter how small – is not only valuable, but plays a critical role in the natural world. All Firran strive to find their purpose and play their part.[1]

The Firran are an anthropomorphic feline race, they live in nature and are expert hunters. Each member of the Firran race has a Snowlion as a pet, which serves as a mount and is also a constant partner in life.[2]

As the Harani tried to build their empire, they came in to conflict with the indigenous Firran people, but the Firran were much stronger and quicker. The Harani changed their strategy and began to settle in lands that were more wild and not inhabited by the Firran.

After some time, the entire continent united as Haranya, under the Perinoor Empire. Perinoor was able to absorb the Firran because their numbers had drastically decreased over the course of the war. This planted the seeds of antagonism within the empire, and four kingdoms stood divided. Within the empire, Austera stood alone in its desire for independence, which quickly brought about Austera's Revolutionary War. The rebellion failed, but independence was gained when Empress Pavitra passed away, and the Perinoor Empire collapsed, causing the Firran to drift away from Ishvara, dispersed among the separate Eastern, Western, Northern, and Southern empires.

After the collapse of the empire, hostilities still existed, but they faded with time and the Haranya Alliance came together again. Of this coalition, the Western was the most developed, dwelling in the old Imperial Capital. The Southern empire was prosperous, and the relatively small Northern and Eastern forces came together with it in Mahadevi.

The influence of the Ishvaran Empire shifted to the Nuian powers, who had come from the island of Ynys and established Ynystere. There was controversy in Ynystere as the Nuians expanded their influence.[3]

The default mount of the Firran race is the Snowlion. 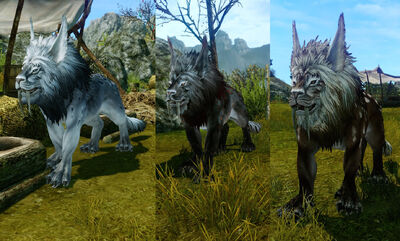