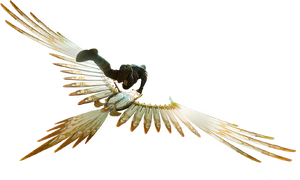 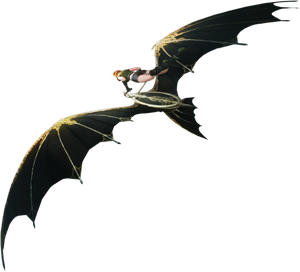 Gliders are a unique take on flying mounts that allow you to control your character in the air while also taking into account gravity, height, duration of flight, and potential obstacles in your path. Gliders will always tend to, well, glide down; different models have more or less time and ability to stay aloft, but the higher tier gliders all have the same stats except for they all have different abilities.

Gliders are equipped to your character’s back in the same slot a trade or resource pack would occupy, thus preventing you from gliding while also carrying a heavy load!

There are multiple different glider models, including one dropped by the legendary Kraken.[1]

Every glider has a set of ratings in these basic stats:

Since 3.0 Revelation, the stats of most gliders, except for the non-ultimate beginner gliders, are normalized, that is to say, their stats are the same, they only differ in looks and special abilities such as an upward boost to quickly gain altitude, the ability to drop explosives on targets below, dive-bomb, quick side-rolls, etc.

The basic glider is offered through an early quest line and can be upgraded through the crafting system at various levels.

The Experimental Glider you obtain can be upgraded three times. Each upgrade is in the form of a blueprint purchased for Gilda Stars at Mirage Island, you use these blueprints along with your glider in the Machining section of a Carpentry Workbench. The upgrades must be done in order, if you want the Enhanced Glider then you must upgrade to the Improved Glider first.

While flying you will be able to change your height, directions and speed while using your movement keys or mouse with the primary button held down. When flying the only limit to where you can explore is whether or not you have sufficient height to pass over obstacles. The higher you are on the terrain when you deploy your glider the further you will be able to fly and the higher the obstacles you'll be able to fly over.

Flight time and distance varies depending on your height at take off, and whether or not you have skills to prolong your flight. Most glider flights are also limited to 3 minutes as indicated by a buff on your character however some rare gliders have flight times up to 10 minutes; If the buff runs out while you are still in flight you will fall to the ground and take fall damage. Dismounting (R)too far above the ground will also cause fall damage.

There are several gliders in game, obtained either by loot drop or crafting.

1Unknown is the value specified in game, it is thought to be a value above Very High.

2The Feathered Dragon Glider does not lose altitude when holding "back" ("S" by default) and is immune to turbulence.

These gliders, while in other versions of the game, are not confirmed for the North American version of ArcheAge. However, they may be worth mentioning.

1The Ultra-Lightweight glider's Nitro skill requires character level 30, while other gliders have no such requirement.

With Revelation, a new type of glider was introduced, the Magithopter.

Whilst behaving similar to normal gliders, they differ in a few key areas:

Additionally, they are more diverse in form than the gliders, which generally still resemble a glider, whereas Magithopters can range from a balloon to wings.