Growlgate Isle, or Pirate Island, is the hub for those who-you guessed it- choose to become a Pirate. 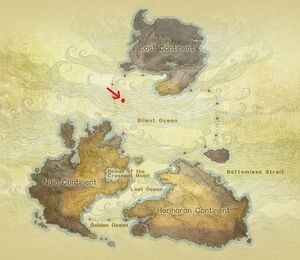 There is a small amount of the island set aside for players to build on.

Near the center of the island you will find a small pirate settlement complete with merchants and crafting equipment.

At the top of the tower is an NPC guarding a Jolly Roger flag who will attack anyone who approaches it, however, he is not very deadly and a small group of players should have no problem defeating him.

There are many barrels found along the coast and under the water in the area. Breaking them can allow you to require some fairly unique items such as Leather Pirate Clothing, Pirate Dolls, Fireworks, and Aquariums.

Just off the coast of Pirate Island you will find the Black Pearl which houses the raid boss Morpheus.

Players who die on the island are sent to Pirate Prison. [1]