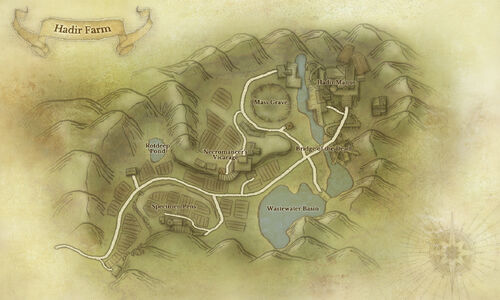 Upon entering Hadir Farm, group up with your party and stay close to each other. Getting too far ahead of the rest of your group is dangerous, as enemies spontaneously appear when you get close enough to their spawn point. Once everyone is ready, proceed down the path, stopping to take care of each group of monsters that spawn along the way. While the trash monsters usually come in groups of 3, it is recommended to take the monsters on 1 at a time by crowd controlling anything you aren't fighting with a long duration skill (Leech, Bubble Trap, Earthen Grip). Do not pull more than 1 group of trash mobs at once, as doing so spells almost certain death for the party. Try to let patrolling trash mobs come to you, as they can dangerously alert other nearby mobs of your presence, causing them to be drawn to you.

Once you reach 2 farmers held captive next to a cauldron, you've just about reached the first boss. Destroy the cauldron to set the farmers free and trigger a miniboss. Dispose of the miniboss quickly and prepare for the first boss.

Have the tank walk up to the pond until an NPC appears, then quickly run back to the group. The NPC will summon the boss in the pond. There are 2 important mechanics to this fight. The first being that throughout the fight, the boss will sporadically knock everyone around him up into the air. This isn't incredibly dangerous in itself as the boss doesn't do much during this, but meleers and anyone else too close to the boss will take some damage from this. The second being that the boss occasionally throws out an incredibly strong poison. The poison is very dangerous, and if you get hit by it twice without being healed, you are likely to die. However, the boss only throws the poison out to his front and sides. This means that anyone standing behind him should be safe. It is important to have the tank face the boss away from the group so only they will get poisoned. Still, the poison will kill the tank eventually if they do not receive massive heals or a cleanse (Mirror Light, Purge. If the tank is capable of holding aggro, this will be a very easy fight, as only they will need to be healed and cleansed of the poison. The fight will become much more difficult if any DPS pulls the boss' aggro, as he will turn around and likely poison everyone, causing a wipe. If this happens, just run away and reset. The boss has a very long aggro range and the poison slows its victims, so more likely than not everyone will die. Keep attacking him and healing the tank until the boss is dead, then loot his corpse. Then continue down the path, ignoring any paths off to the side.

More groups of mobs will keep coming up, do away with them as you did before. About half way between the first boss and the second boss, instead of the normal trash mobs, around 20ish level 31 non-elite monsters will spawn up. They are not cause for worry and can quickly be destroyed. This is followed by a few more trash mobs. When you are just about to reach a 4-way crossroads, the second boss will spawn up.

The second boss has a tendency to aggro on someone very quickly after she is spawned, so it is important for everyone to be ready for her. Throughout the fight, she will continually rain down AoEs on everyone. There is a few seconds before the AoE hits and you are given a decent amount of time to move out of the indicators before they hit. It is highly suggested you do so, even if you are midcast, as they deal a lot of damage. Also, the boss will occasionally summon a tombstone totem, which must be quickly destroyed, or the boss will spawn additional mobs until the tombstone is taken care of. One she is defeated, loot her corpse and continue to the left at the crossroads.

At this point, you are already very near the third and final boss. Continue to do what you've been doing to clear trash, proceed until you see an NPC named Hadir. Kill the 2 mobs he summons and approach him. A cutscene will begin, and Hadir will summon the final boss.

The third boss is incredibly difficult to defeat. Before entering the pit to fight him, make sure everyone is ready, and mark the boss as he may spawn copies of himself toward the end of the fight, and it may be difficult to tell the real one apart from the spawns. Once this is done, allow the tank to run into the pit and aggro the boss, with everyone else following shortly behind. Once the fight has begun, a yellow circle will appear somewhere on the ground in the pit. It is the job of whoever has aggro to lure the boss over that circle, as he will take almost no damage until he is on top of it and vulnerable. The circle moves from time to time, so pay attention to when to move over to it! The boss will frequently spawn 4 AoE circles around him, with indicators shortly before they hit, much like the second boss. It is incredibly important, and cannot be stressed enough, that you do not stand in these circles, even to finish casting a spell, as they deal very high damage. Meleers may find safety in the middle of the 4 circles, while ranged DPS avoids them from a fair distance. Throughout the fight, additional mobs will rise up from the ground and aggro on anyone near them. It is advised to either kite them around or dispose of them as they appear. When the boss gets close to dying, he will spawn copies of himself around him, each with its own 4 AoE circles. At this point in the fight, it is very important to finish quickly, as it is near impossible to avoid the circles, even at range. Standing where 2 or more circles overlap almost guarantees death. Continue attacking the boss over the yellow circle until he is dead, then loot his corpse. If you have a mentor (level 40+) and a mentee (level 31-39) who each have their respective quests, they can open the chests that will appear on the ground after the boss is dead for some loot. While the dungeon has a 5 member limit, only 2 mentors and only 2 mentees may use the chest. A fifth person will be left out, and the quest can only be done once per day, so decide who gets to open the chest beforehand. After all of that is done, exit the dungeon using the portal. Congratulations, you've beaten Hadir Farm!