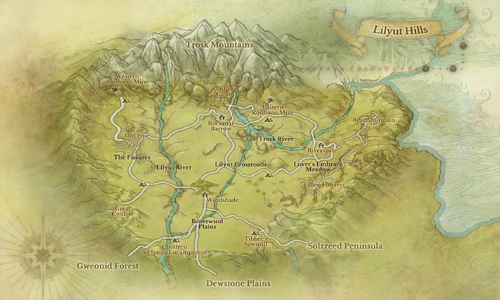 Lilyut Hills is the second questing area a Nuian or Elf will enter. Windshade stands at the center, and is where the Blue Salt Brotherhood is based, though Rockmar Barrow holds its lord in Ronbann Castle, and may perhaps be called its capital. Here in Lilyut, you will find the area is under constant threat from the Cult of Dahuta, and where it isn't, the Bear Mountain Bandits or the undead Army of Castigant is laying siege to its villages.

Under the shadow of Bear Mountain, there is a quest to be found involving dark magic and a ritual site, where you can learn how to summon a twisted monster.

If you feel like exploring, there is a battlement just next to the rift for the Armies of Castigant to spawn, and (once you get past the zombie warrior that patrols its heights) the view there is magnificent.