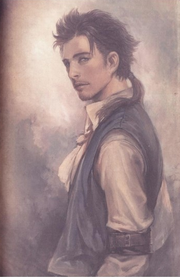 Lucius Quinto was a human playwright in Delphinad and the bard of the First Expedition. He plays a role in the Lore of Erenor and wrote down the expeditions story. He managed to escape during the exodus from Auroria when Nui sacrificed herself. Lucius can be found in Erenor in many shapes and forms but he is always the advisor and story teller - the role he agreed on with Thiol when he accepted one of her soul fragments.

Lucius is related to the profession of Songcraft and might have accepted the soul fragment of the former God of Art, Anil.

How he joined the expedition is described in the journal entries from Orchidna.