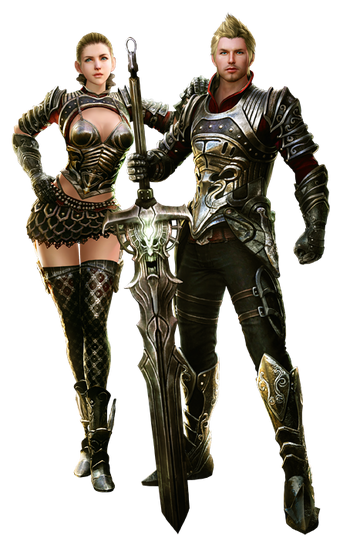 Called the Conquerors of the Continent, Nuians possess a deeply spiritual culture that revolves around Nui, the Goddess of the Hereafter. They revere the beauty and harmony of their fallen kingdom and fight fearlessly to maintain the traditions that brought them to power.[1]

After many periods of war, both among themselves and with other races, the Nuians have become very resilient, and are very quick to rebuild after defeat.

The Nuians have always lived for their gods and their mission, without forgetting about their interests, and their race. In their hearts, the image of the goddess of The Hereafter, Nui is still present. However, this does not resemble the religious sentiment common to the other mortals. Rather, it is more like the relationship between a mother and her children; faithful and filled with tenderness.

Just like seeds that have fallen on fertile soil and deeply implanted themselves into it, the Nuians knew the value of their old home. After the Great Migration, they had arrived in a completely new environment and interracial conflicts began. However, the people could not forget the past, and started constructing and developing their new home, to build a better future. Unlike the ancient human kingdom Croissant, the Nuians applied a democratic political system. To become the king, the love of the people was not enough. They had to prove themselves in the maze under the capital called The Labyrinth. This new system permitted to eliminate the battles for power. That way, the Kingdom of Croissant regained its strength and conquered all the continent of Nuia. With a pacific and prosperous country with strong rules, a flourishing culture developed. The cultural and economic impact of the Nuians was then felt the whole world over, shining like a diamond. Their civilization illuminated the known world.

However, the Nuians were haunted by terrible memories : the war against the demons. The demonic army was invincible. The Kingdom of Croissant had ravaged by brutal hordes. There was nowhere where to hide, and all the buildings were soon destroyed. After the Demonic Armies destroyed the country, they slowly dispersed across the far corners of the world. Nevertheless, they left behind the seed of discord amid the smoking ruins of the city. The leaders of the Kingdom of Croissant then had a lot of trouble taking care of the country.

Under the tutelage of their queen, the Nuians did not forget their goal: To never shrink from the forces of evil, and to be the brave warrior that stands alongside the goddess; those who face the demonic hordes. Lovers of nature, the Nuians always looked for new territories, far from their continent, hoping that someday, they would be able to write another chapter into their glorious history. [2]

Nuians - one of the most populous people in ArcheAge. They are descended from the northern tribes of Auroria and the Primordial Efenov Nakshasov. Their appearance has remained virtually unchanged for centuries: tall, fair-skinned and fair-haired.

These people have a deep reverence for nature and spiritual omens. In regard to religion, the Nuians are named after their patron god, Nui, Goddess of the Hereafter. The Nuians are wary of magic, but have a keen interest in trying to subdue the forces of nature for their own purposes.

Nui and eleven other adventurers set off to find the Birthplace of the World, created by mother goddess, to find the origins of magic and life.

When the magic power to sustain life on Auroria was exhausted, Nui rescued the survivors by opening a portal to the White Forest, now known as White Arden. In honor of her sacrifice for them, the Humans she had saved took on the name Nuians and quickly set off to explore their new lands. Immigrants settled in the north-eastern part of the Western continent, and Year of the Exodus was declared the first year of the new chronology.

Also nuian, moved to the West Mainland dwarves and elves. Representatives of the three nations concluded an alliance that is predicated blessing Nui, gathered at the crossroads in the heart of the White Forest - a place that was thought to have borders with the world beyond the grave. Council decided to all lands north of the crossroads depart possession elves, dwarves make a point west and east remains nuianam.

First settlers settled on the island and peninsula Inister Solrid. In '50 after the Exodus, which received the name in historical chronicles, the rise of the crescent, due to repeated conflicts people have decided to create a single state. Not to generate even more hassles, they refused the transfer of the royal title by inheritance and were elected governor by testing in a special Labyrinth. Thus was founded the kingdom, called the Throne of the Crescent, which became the first ruler of a powerful mage Solrion.

In '88 and n. Throne of the residents went to master Crescent southlands Nui. They founded the city of Thessaloniki (hereinafter - the fortress of the two crowns), which would become the largest trading port on the entire continent. Salem formed kingdom.

Kingdom Crescent continued to evolve, and in 180 settlers from the island Inister built on the Eastern continent settlement of Ministers. They mingled with the local tribes, creating their own unique culture.

In the year 240, and n. in the center of the southern part of the continent was laid out city-state rose End (later - Merianhold). He quickly grew, attracting new immigrants, and became a center of trade on the continent. Salem rulers began to envy the prosperity of the city, and eventually between countries appeared more conflicts.

In 390 and n. Kingdoms intervened in a feud third force. Illion, claimed the throne Throne Crescent, failed the test and decided to take the Labyrinth journey south. He quickly gained Salem, the ruling family which, nevertheless, managed to escape and flee to the Eastern continent. In the year 395, and n. he attacked Rose End and a few months besieging it. To prevent any possible corruption, clans Rose End decided to conclude a peace treaty Illion. His wife was Marian Veyrdvind, representative of one of the ruling dynasties, which proposed the idea of ​​making peace. In honor of the savior of the city was renamed Merianhold. Illion received the title of "Lord of the Two Crowns" and founded the new state - Two Crown.

Thus, on the mainland just two big states. Thanks to wise rulers and enterprising merchants they quickly flourished. Many centuries continent Nui really wallowed in luxury.

In the early 1600s, and n. one of the graphs of the two crowns started the war, trying to gain independence from the throne. To secure a victory, he made a deal with one of the most powerful demons. Ongoing battle raged across the country, and two crowns in chaos.

In war, the demon used varbornov mysterious race - strong and hardy warriors, whose bodies are resistant to poisons and cuts. Thanks to them, a demonic army to move forward quickly, leaving behind only destruction. Forwards easily devastated castle and attacked the two crowns See Crescent. Residents fled the kingdom, not trying to offer resistance, and the entire peninsula was dominated Solrid invaders.

Desperate, nuiane decided on the last fight, during which demons army commanders suddenly separated from the army and varbornov disappeared. People easily defeated lost their overlords varbornami and drove the survivors of that race on the East Mainland. In the Kingdom calm has, and all the forces nuiane sent to restore his power.

Since the time of demonic war took almost one and a quarter years. Now nuiane already recovered from past shocks and live in a precarious world. As before, they are cooperating with the elves and dwarves, but live apart. Since the signing of the union strongly considered cranky and lord people are looking for ways to build trust between the residents of the Western continent.

Now nuian main goal, as well as other people in the world ArcheAge, - again master Primal continent. A lot of people do not fear monsters populate the world after the split, sent to his research.[3]