Aside from the three continents there are several other areas players can access.
For instanced challenges, see Dungeons. 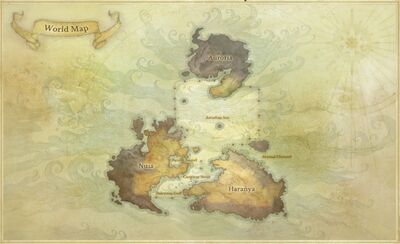 An island not seen on the world map, and is only accessible through a Mirage Isle portal. It is a circle-shaped island, with a small sea in the middle. One can view houses, vehicles, and participate in the Fishing Tournament.

The largest body of water in Erenor. One can find Sunken Ships, Sunken Treasure Chests and ocean beasts. You can find exploration spots and islands with housing available as well.

An unreleased area north of Haranya and a nearby island.

A smaller sea that has several islands for housing, and is a common sea for merchant boats to travel to the other continent to sell trade packs.

A sea south of the Castaway Strait that also includes several housing islands.