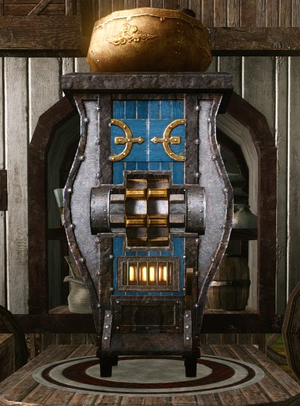 Trade Packs are not inventory items, but are worn like equipment on the back. This will greatly reduce a player's movement speed, including while riding on any mount - except for donkeys. Player attempting to move packages should seek efficient ways of travel such as carriages, airships, donkeys, personal vehicles or ships.

Trade Packages can be dropped, where it can be picked up by any other player. Players often engage in PvP in order to take each other's Trade Packages - be careful when going across PvP zones. Trade Packages expire within 6 days. Simply picking it up and placing it back down will reset the timer.

When a Trade Package is delivered, 80% of its profit goes to the player who delivered it, while 20% goes to the player who crafted it. Trade Packs may be placed on player owned land as well, as long as the right permissions are set. Besides those who have permission to use the farm it is protected from the public. A Trade Pack will say "Free loot" on the mouse tool tip when hovering over it if it's not on protected land.

The "Owner" tag on the mouseover tool tip displays whoever handled the pack last; to check who the crafter is, open up the character menu and look in the "Trade Pack" slot on the bottom right.

Workbenches and all forms of turn in points are shown on the map. You may have to tick the respective check boxes to have them shown.

Trade Packages must be crafted. Each region has its own unique Trade Packages, with different crafting ingredients. Crafting efficiency and labor cost is reduced with Commerce skill level. There are 3 types of regular trade packs:

A farm with Aged Cheese larders

A multi-purpose aging larder allows the player to age particular goods to be harvested at a later time as a trade pack. This trade pack can then be turned in anywhere but the originating zone.

These function exactly the same as a regular trade pack, except that they are worth more to the trader. There are three types of packs that can be crafted:

They are all equal in value to the trader, it is up to the crafter to decide what materials they want to add to the larder.

Crafting a larder requires a

Farmer's Workstation, under Husbandry>Husbandry Gear. The materials needed are: 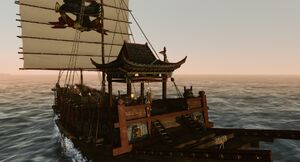 A player sailing across the ocean with trade packs.

Cargo Oversea Packs can only be sold oversea to special Cargo Buyers. They give the option to trade Certified Cargo Packs and these reward Charcoal Stabilizers at regular cities or Dragon Essence Stabilizer at Freedich Island.

The Rock Salt and Crystal Stabilizers can no longer be obtained by selling trade packs to Resource Merchants, but can easily be converted to Charcoal Stabilizers.

No more gilda trader on 6.0

[outdated] List of Rewards for Continental and Intercontinental Traderuns