The CBT5 introduced an innovative trading system to the world of ArcheAge. The fundamental aims of this economic system were two: first, that the production and trade of rare goods be driven by teamwork and player interaction, and second, that piracy should also be a constant threat and viable strategy in the world of Ark. The current incarnation of the system has achieved both of these aims, creating a dynamic, vibrant, and dangerous player-driven economy that has become a centerpiece of the gameplay.

A simple explanation of the trade system breaks it down into three steps. A player first crafts a trade pack using raw materials or goods harvested from the game world, then carries that pack across the game world before depositing it for a profit at a target destination. The transportation process is not without its dangers, however, as trade packs reduce a player's movement speed and make him vulnerable to other players who may steal his goods. If a player is killed by a bandit or pirate, the trade pack is dropped and may be captured by the criminal, who may then deposit it themself and usurp the profits.

Successive patches have added additional innovations and polish to initial design. Trade routes, trade boxes, and other refinements have undergone several iterations, and more are expected throughout open beta testing.

The trading system is based on several factors. Like making the goods and transporting them, but also factors such as climate zones and the open PvP in ArcheAge have to be considered.

First and foremost, you have to work together as a group or Expeditionary Force (guild), so that you can master the first trade route successfully. Also it is very important to have already gathered sufficient experience in crafting.

But how does a trade route run exactly? At the beginning, of course, only one specific product is available for making, called a regional specialty, later you can make more exclusive goods using specific crafting stations in the area of origin of the goods. Since you obviously can not get rich with the transport of a piece, you should work to eventually produce all the goods charges. This pack of goods doesn't fit naturally into the inventory of a player, it has to be carried on the players back (like a pack of wood) or in a suitable container of a transport ship, tractor etc...

You need materials from a variety of professions for each of these specialties. The dealer itself is then responsible to the station for processing these materials into a package. The trading profession is enhanced as all other professions through production and exchange and has 10,000 value corresponding to each LP benefits such as reduced consumption or increased crafting speed.

There are now 3 different type's of commodity: common, uncommon and rare goods. For the production of a transport box always needed a so-called trade certificate. This is to be purchased for 50 silver at each crafting dealer. These 50 silver set as the basal metabolic rate for each trade box.

About the different type of Trading Goods:

Common Goods:From these products, there are two possible boxes of goods per region.

Example: Strawberry Jam=This box requires 100 strawberries, you can get through the acquisition and cultivation of about 35 strawberry seeds (70 silver from the NPC). Alternatively you can purchase the strawberries at the auction house.

Uncommon Goods:From these products, there is one box of goods per region.

Example: Salt Redder Cart=This box requires 3 sturdy vines, an unusual material that can be obtained in the harvesting of grapes or the lumber of vines. We also need 5 bark of a cypress tree. This can be obtained with a relatively high probability when cutting or felling of all trees in the category "Cypress Family". As always, you have an alternative to buy them from the auction house.

Rare Goods (Specialties):From these products, there is one box of goods per region.

Example: Willow Thistle Cargo=1. 1x willow wood=Willow is a rare wood, which can be obtained by cutting down willow trees. An exact drop rate is not known, but you should already have to make something to get ran there. 2. 3x light goose feathers=Light goose feathers obtained occasionally during shearing of geese. 3. 30x iron bar=Iron bars obtained by the smelting of iron ore, which in this case, the ordinary material.

Once you have made one or more transport boxes, it starts and the "caravan of merchants" can go out. Now you have the opportunity to deliver this box to various points in the world. The profit is usually determined by the distance to which you carry the box. You also have to consider whether you want to have Gold Coins rather, with which you can buy stuff from the NPC's, auction house, other players or whether it should be the coveted antique gold coins (called Gilda Stars) with which you can buy items on the Mirage Island (Trade Island), soulbound items such as house plans, furnitures, other blueprints, mounts, costumes...

Trader As A Profession[]

"Trader" is one of the 21 currently available in-game Professions. Leveling this profession is being performed the same way as any other, by use of LP (labor power points).

You gain skill by:

-Trading in the Auction House (per goods sold)

As you see, it pays out to level up the trading profession. The less LP you need, the greater your routes can be, and your profit will be higher as well.

In order to make the highest profit, you should go with this system. Therefore you should consider several factors:

1. Box Amount The more boxes you take with you, the greater the income will be. Also, it's advised to do trade runs in a group so that you could protect each other easier should someone attempt to steal your trade packages. You should also take advantage of merchant ships and tractors which allow you to carry more packages.

2. Distance The saying "Time is money" is especially true in this game. Even if there is more gold to be made by taking a package further, the risk of being attacked is higher as well.

3. Bandits Risk When someone uses the safe zones to go to the desired location, the risk of being attacked is zero. But, the income will be low as a result. If someone dares to go to the other continent or the middle of the sea, the risk of getting attacked by pirates and enemy players is pretty high, and the further you go with the package, the greater the risk. Thats why its advised to take someone with you, and let this person go and scout the area in front of you for pirates and enemy ships.

4. Cost of the Materials What good is the most beautiful little box, especially when the rare materials added to the time or the budget. The more experienced a character in gathering, farming, the higher is the probability to obtain the rare and coveted specialty materials. Also more free time and regularly checking the auction house can help obtain materials cheaper.

5. Coin Type Also a criteria, the decision whether to dare a major investment to fulfill the dream of owning a home or a tractor or better invested in other materials.

6. Mercenaries It will definitely be in the game, mercenary guilds that can be hired for a certain fee to accompany you on your journey. Are you still sure you can trust these people? Check if the players have a good reputation and above all a good skill in PvP. A good soldiers can always pay off when the gold receivables are not too large. Actually mercenaries are recommended only when a sufficiently large amount of goods planned to be carried. So if you are playing in a trade-EF, you try early in the game to form an alliance with a mercenary guild.

You must now set up your own expense, do not worry, after a few "trial runs" you have to bow out safely and know where you can deliver your goods with the best profit.

Transportation of the Trading Goods[]

This chapter will deal mainly with the various transportation options for the trade boxes.

The number of slots available for trade boxes for different transformation methods:

+1 means a trading pack on your back

On Foot: The first trade routes you will probably have to cover on foot, at least partially. You will quickly realize how much you are being slowed down with this pack, by carrying a pack it prevents your character from running, so your need to walk. With the Sprint skill at least you can (as long as the mana is enough) run some short distances with increased speed. Thus it's advised to use a Donkey mount or a vehicle for faster transportation.

Public Transport: With public transportation, you are able to travel faster through the continent. If you catch the exact routes, then you can finish in a good time for your trade run. The Airships and Carriages will definitely come in handy and you will use them very often before you obtain carts or ships.

The Donkey: Just get this beast of burden, when you have completed the second trade route quest line. Alternatively, you can buy the Donkey on Mirage Island for 5x Delphi Stars. The Donkey rides with a ground speed of 4.0 m/s, even with a load on his back, other mounts get slowed down while there is a trading pack on them. At level 20 the Donkey gets another important skill for transportation, the "Carrot on a Stick". With the donkey trade routes should go faster, inland.

The Farm Carts: The tractor is a true multi-purpose tool for the player. Not only that you can water the plants and thus grow faster, it has up to 6 cargo slots (depending on the vehicle type) and can be used for transporting packs. The driver itself can also carry a pack on his back while driving. Other players may hop on top of the vehicle and ride with you, even with packs on them.

The Merchant Ship: The Merchant Ship is a relatively fast ship, with which one can express his trading goods over the sea. It can accommodate 20 trading packs, has 2 cannons, which provides some defense, and a radar for monitoring of marine activities and has a skill for quick turns.

You can buy the blueprint for on Mirage Island or wait for a bargain at the auction house. In addition, you still need 300x Wood Planks, 300x Processed Fabrics and 300x Iron Ores, so that you can build the ship on your own dock. A lot of coordination and nautical skill is required to safely steer the ship in the (partially hostile) port. Also a good crew is important for bringing the trading goods safely across the seas.

An experienced trader can build a telescope with a skill of 10,000. When using, all ships within a 1km radius are revealed on the minimap. This allows the player to coordinate as a trading officer of a large trade fleet, if not enough tractors are available at unloading the ships, plan your trade routes a bit better.

Sadly only for gold, but resources and gilda stars are awarded instead of 2 gold and are rounded down 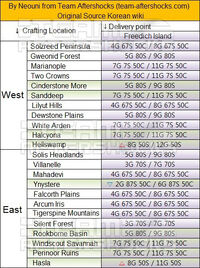