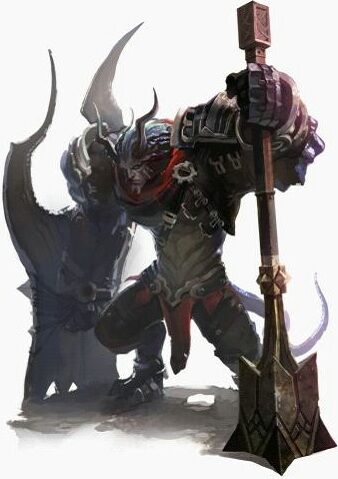 Once they were honorable dragon hunters, called the Nuon. They defeated the dragon god, Misagon, littering the Karkasse Ridgelands with his body and the bodies of his children. Problem is, they got cocky. They feasted on the flesh of the fallen god, and in so doing called down a powerful curse upon their people. Their entire civilization disappeared overnight, leaving nothing but dragon bones and crumbling ruins to mark their passing. They were banished by the curse into a dark plane of torment. But Orchidna's father made a pact that she would lead them back to Erenor and in turn become their queen. She fullfilled her promise while on the throne in front of the gate to the birthplace of magic and they went to war for her. The Nuons, now known as the Worui Si (Fallen Dragon Hunters), were responsible for countless deaths and labeled demonic murderers - hence the war's name "Demon War".